The Story of Blue Bay Farms starts in Holland 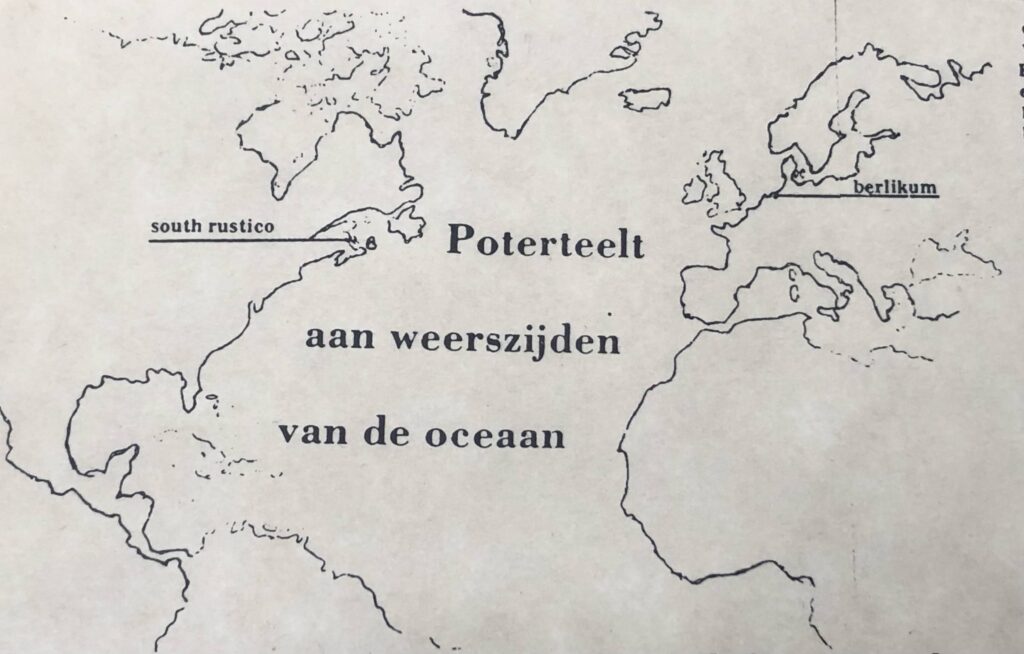 A map showing South Rustico and Berlikum, and the ocean between them.

Before coming to Canada, the Nieuwhof family lived in Berlikum, Friesland, Holland, where they had a farm.

Minno Nieuwhof (Father of Randall, Klaas, Marten, and Tineke) worked to build up the home dairy farm with his own father, and eventually they expanded into the seed potato business.

1978
The decision to emigrate.
Family of Farmers 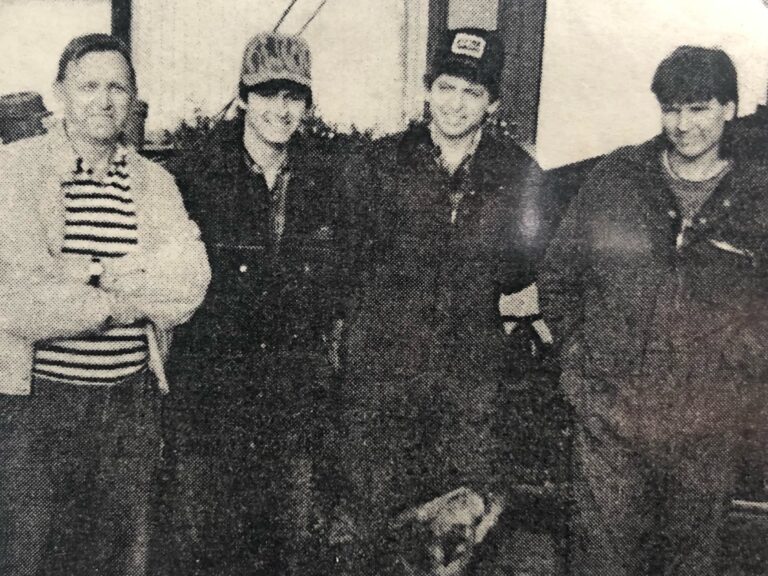 During this time he met his wife, Anna, and they started to raise their family of five children. Minno wanted to continue farming and give his sons a future where they could all make a living, but with high land costs, regulations, and limited space for expansion in Holland, they made the decision to emigrate to Canada.

In October 1978, the Nieuwhof family found their new home on PEI.

1979
From one continent to another.
From Berlikum to Rustico

The airplane that took them on their journey.

On April 2, 1979, Minno & his wife Anna, along with their five children made the journey from Holland to Canada. They landed in the Heathrow Airport in London, England, then they got on a D10 airplane that took them to Scotland, then Halifax, where they went through customs. One more short flight to Charlottetown and they made it to PEI.

1979
The end of the destination and beginning of a new journey.
New Home 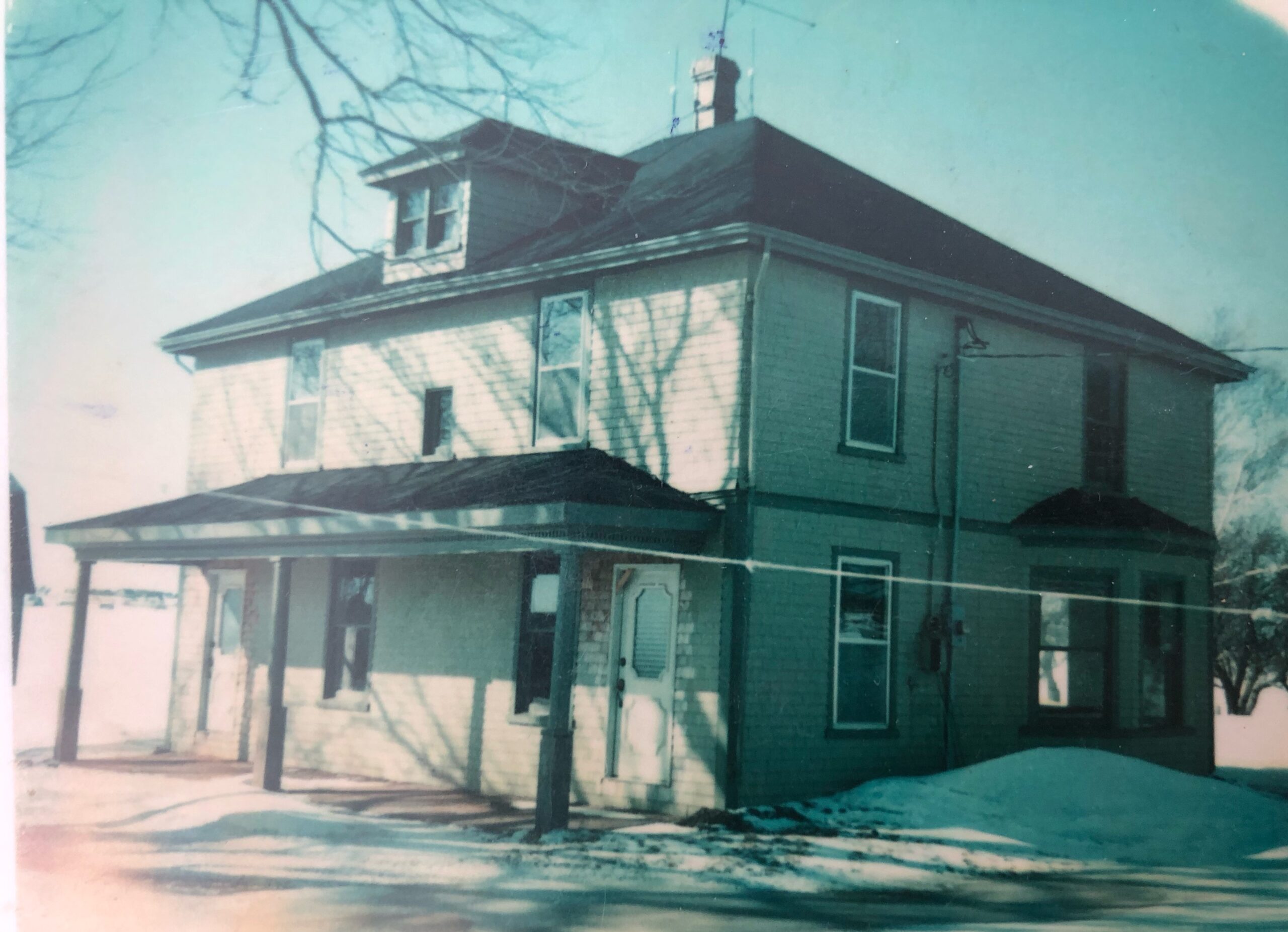 The Nieuwhof's first home in Canada, which can still be found on the main farm today!

They were picked up by the realtor that sold them the farm in Rustico, and driven to a house in Charlottetown where they could live until the farm house could be renovated.

In that first year time was spent turning their house into a home, all the while growing 125 acres of potatoes and raising some cattle. 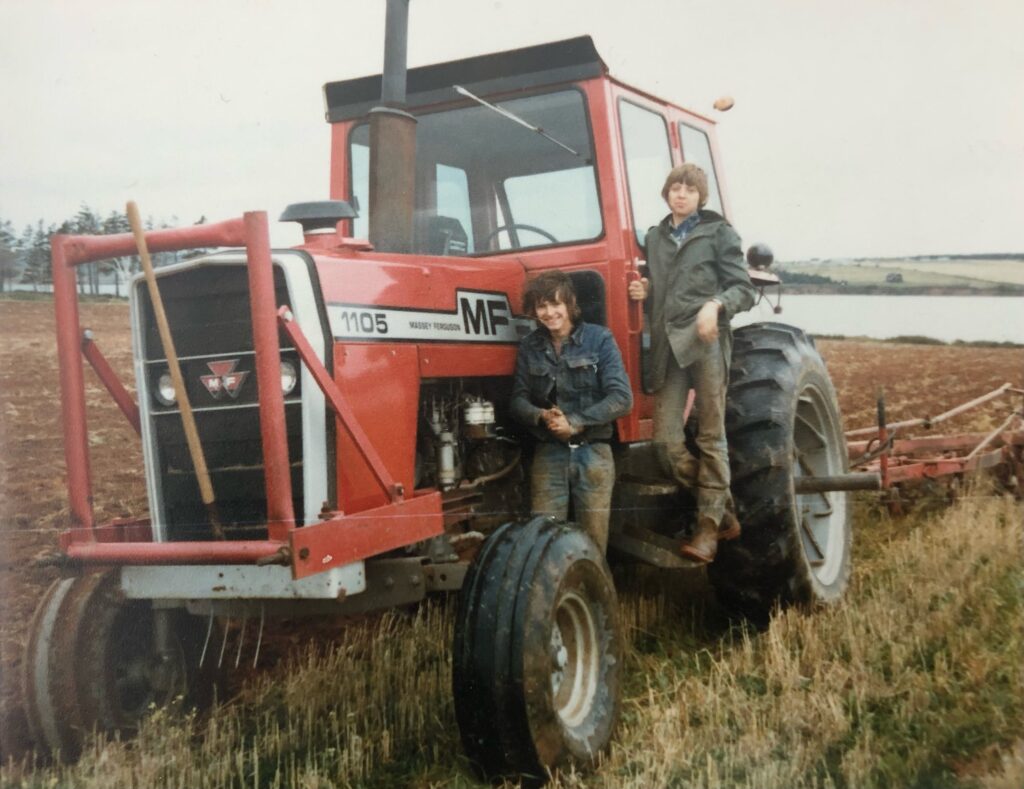 Two tractors and some other equipment were brought over by a freight container from their old farm in Holland.

Our tractors are a just a little bit bigger now.

One of the first Blue Bay Farms signs.

The whole family was involved in choosing the name Blue Bay Farms. It's inspired by the beautiful Blue Bay right next to our farm, reminding us what a beautiful place we are blessed to live in. 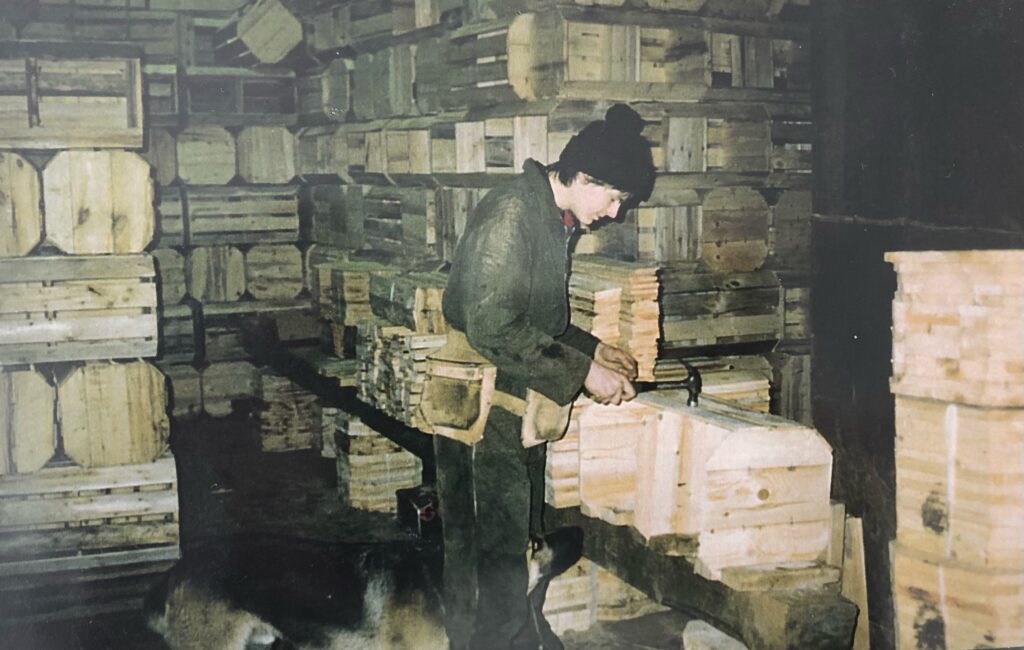 Back in the day, we used to transport potatoes in wooden crates. Here you can see the work that went into that.

1988
Outstanding in their Field 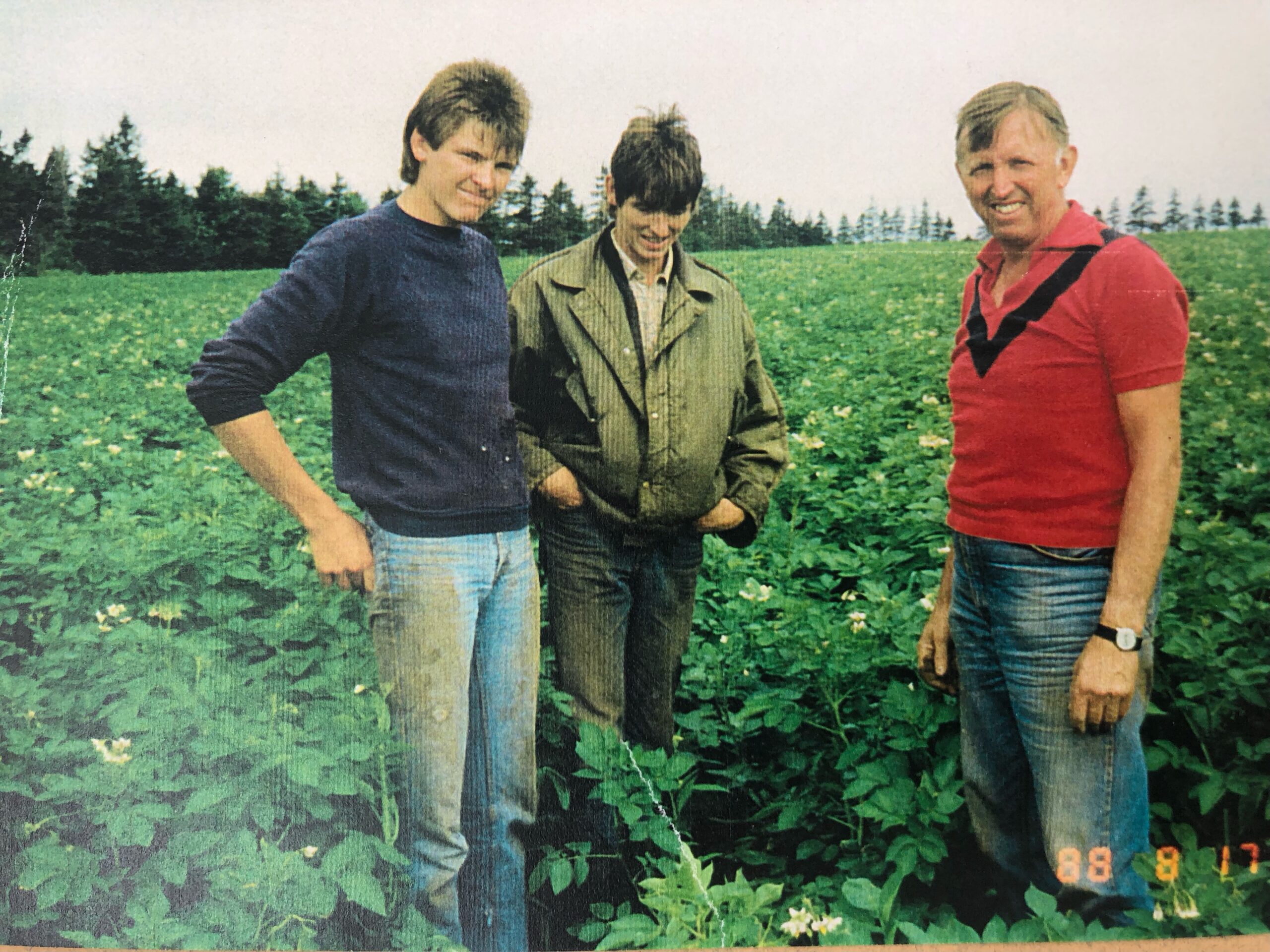 Minno with his sons Randall and Marten in a field of potatoes in bloom on August 17, 1988. 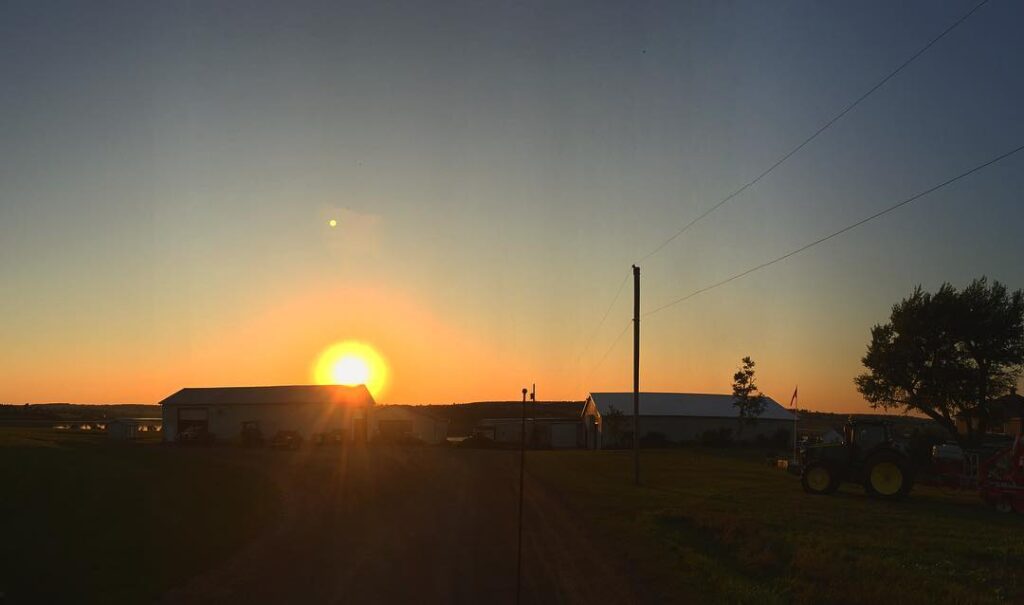 Sunset at the main farm.

Blue Bay Farms is still currently owned and operated by Minno's children (Randall, Klaas, Marten) and grandsons (Pete and Andrew). Many other Nieuwhof's can be found helping out too.

The hope is that we will continue to be able to create more history and grow high quality potatoes for years to come.